Macroeconomics can't be done by official economists because it's too easy, not too hard. It's high school at the hardest, meaning can't impress your smart friends with it. I'm about to go from spherical-cow game theory to the business cycle in a couple pages, skipping only the justification of prices(supply, demand). Compare going from quantum chromodynamics to how your liver works - could easily take a million pages.

I welcome corrections, either below or here. 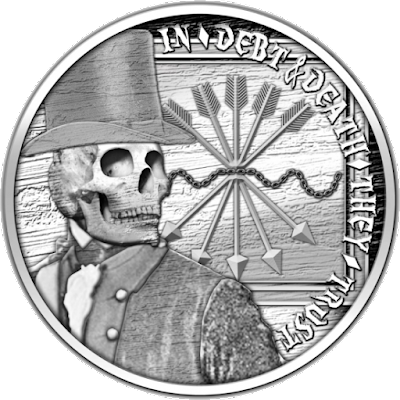 The price of future money is always discounted. This discount is usually called 'interest,' but this is misleading. The market interest rate has three non-price factors, the combined effects of future time orientation, future instability, the net expected inflation/deflation rate. Finally, interest includes the supply/demand balance, and therefore price balance, of present money versus future money.

(It's counter-intuitive to think of demand for money in terms of goods rather than the other way around, but doing so has no economic flaws.)

The market is not clairvoyant. The supply of money it sees is whatever demands goods, not any sort of total supply, meaning savings and debt affect the apparent supply. Saving more money sequesters it, causing deflation. (Essentially, saving creates a velocity discrepancy.) Lending out more money increases the apparent supply, thus causing inflation in addition to altering the present/future supply/demand balance.

Average velocity does not affect the price of money. While greater velocity increases the supply the market sees, it simultaneously increases the demand the market sees. The absolute velocity, $/second, being neutral to supply and demand is the reason any amount of money is enough to run any economy, subject only to being sufficiently divisible. In addition, the relative velocity, %/second, is neutral.


As I understand it, under fractional reserve, consumer banks can deposit physical bank notes at their federal account, and lend out ten times that amount to consumers. Further, they can lend out ~90% of anything deposited with them. Since the amount they poof into existence will get eventually get deposited at a bank in most cases, the math works out such that they can lend out roughly 100 times whatever they deposit with the Fed. (Capital requirements are a different way to the same goal.)

Having written the above, aside from the risk of bank runs, I now realize this has already caused any damage it can. Essentially, the banks own a hundred times as much cash as they 'really' own. While this was doubtless a huge boon to banks at the expense of everyone else, it was a windfall and is now over.

In combination with this, the government frequently backs various securities with the printing press, which the market knows enough to treat as money - however, the market learns about the inflation non-instantly, thus producing an exploitable inflation gradient.

There's a buffering effect from this that absorbs shocks in supplies of goods to a degree. The price of money and level of deflation ends up relatively stable.


Fixed interest rates lead to gluts and shortages, much as any fixed price, to the extent the price differs from the market price. This is annoying, but rarely dangerous.

The dangerous issue arises with artificially low interest rates. It is possible to destroy wealth but make money. If inflation is 20%, and interest rates are 5%, then it is possible to spend the loan on materials that can be sold for 110% of their price, and make enough money to cover the loan and profit. Normally this cash return wouldn't be enough to pay for a full set of new materials, but the revenue demonstration can back a larger loan, and the cycle repeats.

A little over 600 words and we reach the Austrian business cycle. Below-market interest rates destroy wealth until there is no more free-floating wealth to destroy, whereupon even the pretense of production shuts down.

Once the businesses stop existing and thus demanding loans, the money supply contracts, causing deflation. This causation is reversed by official economists, who believe deflation causes economic contraction. They say it's from increased saving, which is plausible, and even true - the banks are saving their 100x poof money. However, it's not by choice, it's from debtors defaulting faster than the banks can find new debtors. Noting the exact same vicious effect happens in hard-money regimes with fixed interest prices.

A shock is easily defined - it's an event that takes the market far from equilibrium. During a banking shock, the amount of goods being made becomes disjunct with wages, causing poverty and oversupplies. Many employees paying money to nondestructive firms lose their jobs, cutting the artery, and the market cannot adjust as quickly as the cuts. Without these oversupplies it's likely the deflation shock would be even more shocking.

Deflation increases the net interest rate, leading to positive feedback. As debts are not rolled over to re-lent out, fewer can afford loans, meaning the money supply contracts further. Normally this would be countered by lowering interest rates, but as the rates are fixed, they can fall neither as fast nor as hard as they need to.

However, even unfixing the interest rates cannot completely solve the problem, as it was caused in the first place by interest rates being too low. Crashes caused by Fed mismanagement cannot be fixed without severe pain, as they require interest rates to go up, to fix the problem, but also to go down, to avoid catastrophic fiscal shocks. Have to shoot yourself in the foot, but you get to pick left foot or right. (Or, past coercion usually can't be resolved without future coercion.)

In practice, we see the Fed reliably chooses to lower interest rates, causing another round of business investment in wealth-destroying activities. In the short term, money is delivered to productive individuals, who can support productive businesses, while in the long term the economy becomes even heavier with parasitic seedcorn-eating businesses. Official economics cannot distinguish between malinvestment causing malproduction, and real wealth increases, because their job is to justify whatever the Fed wanted to do anyway, meaning it's their job to not understand reality.

Freeing interest rates would, in the short term, cause tremendous hardship as technical debt is repaid. In the long term it would prevent economy-wide recessions from occurring, barring innovation in ways to bugger the price system. Sector-specific recessions would still occur, as unexpected drops in necessary production necessarily occur, which in retrospect reveals recent investment as malinvestment.
at 9:40 PM

Well, actually I found out the Fed doesn't punish overlending, and rather retroactively justifies it. Something else is restraining them from lending infinite money.

Bank has $10 in reserve. Can lend $100, does. Debtor immediately buys stocks. Stockbroker deposits $100. Bank can now lend $90 based on the stockbroker's account. Does. Someone buys a not-completely-cheap night out for two. Restaurant deposits $90. Bank can lend out $81 based on the foodie's account. We're up to $271 of debt based on $10 on reserve. This does converge, at something like $968. Round to $1000 because I'm not the Fed and can't change it anyway.

Your understanding of fractional reserve banking is completely wrong, though it's a common mistake.

In reality, reserves are never the constraining factor on what banks can afford to lend. The money multiplier is just a ratio - it plays no part whatsoever in determining the amount the banks can lend.

The real limiting factor is either the Basel capital requirements or the availability of profitable customers to lend to.

http://www.bankofengland.co.uk/publications/Documents/quarterlybulletin/2014/qb14q1prereleasemoneycreation.pdf explains how it really works.

And I can't understand the claim...
"Deflation caused by decreased loaning is countered by the deflation itself discouraging loan buyers."
...wouldn't it exacerbate it rather than counter it?

You also seem to have overlooked that there's a huge deflationary effect from improvements in production, which has to be counteracted by the government increasing the amount of money in the economy - either directly by deficit spending, or indirectly by keeping interest rates at levels where the private sector will borrow more.

And the dangers of artificially low interest rates are greatly exaggerated. With inflation as high as in your example, the government would obviously raise interest rates to try to control it. And in a more realistic situation, the gap wouldn't be enough (and the uncertainty would be too high) to enable businesses to profit from doing nothing, but it would make it easier for businesses to profit from doing something. So ultimately it would be good for business.

Basel requirements are logically identical to fractional reserve requirements. All it does is make 'reserve' slightly more complicated. Looks like you got hung up on the names being different.

Lowering interest rates discourage the selling of loans, not the buying of loans.

Deflation:
Loans go away, you get deflation. However, since loan buyers are discouraged, demand for money goes down, causing inflation.

With inflation as high as in your example, the government would obviously raise interest rates to try to control itWhat a lovely fantasy. Do you come from the past? Have you not noticed ZIRP? Real inflation in China is over 20%. Real inflation in America is something like 13-15%. Even if they don't gather accurate numbers internally, they'll have a good-enough gut feeling. They know quantitative easing is massive inflation, they just hope voters won't notice. (And they usually don't.)

On what do you base the ludicrous claim that "Real inflation in America is something like 13-15%"?

Basel requirements focus on what the bank actually owns, making them quite unlike fractional reserve requirements.
Things that are the opposite of true!
Yeah I'ma go ahead and assume you don't know anything I don't already know.

Considering the incorrect claims you've already made, it's far from clear what you do already know.

Declaring something to be the opposite of true doesn't make it false. If you have evidence that I'm wrong, try posting it!

The reserve requirement is the ratio or a certain type of assets to deposit liabilities. Contrary to popular belief, it does not limit how much a bank can lend, because the bank can always obtain more reserves if it needs to.

Although the Basel requirements do include some liquidity requirements, they primarily limit the ratio of capital to risk adjusted asset value. That is not directly affected by deposits.