Assume everyone needs $100 a month for room and board.
Assume a free universal basic income of $100 is implemented.

On the margin, someone will stop working. There will be less wealth. With less stuff bidding for a fixed dollar amount, the price of money will fall. Inflation occurs. Room and board now cost at least $101, and unemployed UBI recipients are now either getting evicted or starving. Notably this only occurs if UBI is national. Having a limited test run won't shift the inflation needle beyond the noise. 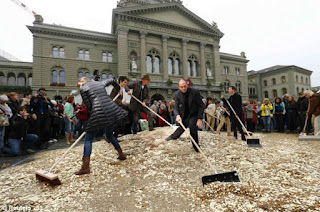 (Indeed subsequent rounds of inflation are all but guaranteed to be higher, as a roughly equal mass of stuff is being removed from a smaller pie.)

I've mentioned serfdom before. If the guaranteed income came with some kind of cost, being universal only in availability rather than in concrete application, the damage would in all likelihood be negligible.
at 5:46 PM

A big reason that guaranteed income will immediately fail is that the people who need it are not responsible.

They have low future orientation and will not budget for housing or food for the whole month. If they had high future time orientation, they would not be poor.

Therefore, you will still be stick giving out housing vouchers and food vouchers, on top of the guaranteed income. The reason there are a myriad of specific programs is because of experience.

Of course it might be true anyway, even though there is no proof of that.

And what happens in a society where, say, there is one workplace for each 10 people? Imagine that we evolve into a society model where machines are able to perform 90% of the activity currently done by humans. (I'm exaggerating so the example is better understood). So there are some "privileged" people able to get a job and an expendable majority of people that are not needed by the society. In this situation, UBI makes sense to me.

Anon, you're assuming that as those jobs are replaced by machines that humans will not find other ways to provide value to one another.

Good point, Jesse. I was thinking in those old Sci-fi movies where people does not have to work because everything is done by machines. These machines are able to generate wealth and that wealth is distributed among the members of the society, as a payoff for having "stolen" them their work. So the right expression is not that this 90% is not needed, but that the system can afford to sustain their basic needs. (I know, it sounds a bit weird, but don't try to apply directly to an actual developed society model. This would need deep changes in current economic models, but *could* work.

That word "theorem", it does not mean what you think it means.

The author seem to have forgotten that the extra demand generated by the basic income will also increase employment. And we already are doing similar things by providing the safety net. The size of the economy is related to the amount of money spent and not to the amount of money owned. Money is not exhaustible resource. It is infinite. There is a limit to its value that is imposed by the limit of the economy which is the total number of workers times their average productivity. Once that limit is reached then pumping more money into the economy causes more inflation. We are not near this limit.

entirelyuseless, try reading the logic a second time. I already addressed your objection. Look for the inductive proof.

At least, it's not possible in any forseeable situation. The market is smarter than you, it will find something productive for them to do.

In any case, the same thing will happen. UBI will have to go up until nobody is working and everyone starves.

Peter John, I would suggest not being formal on a blog. It doesn't come across as polite.

Also you seem to be a Keynesian. Keynesianism is a myth, used to justify the government doing what it was going to do anyway.

UBI cannot create demand. It can only move demand around. Further, since moving demand from the efficent place to a less-efficient place is necessarily wasteful, it can only reduce demand. This is what causes the inflation.

Money is not exhaustible resource. It is infinite.
Are you an idiot or are you a troll?

Money is infinite. This is why all prices are infinite. Oh wait.

We are not near this limit.
"Money does not obey the law of supply and demand, because [nonsense]."
Yes it does. Get off my lawn.