It is not surprising LW went off the rails, because respect for authority and voting are both scholarly anti-virtues. Authority is a time-saving hack for non-scholars, and the only vote that counts is Reality.

Global warming is a better test of irrationality that theism. (No quote necessary.)


"Sometimes I regret not knowing the climate controversy as well as I know the evolution controversy, but what I've seen so far makes me think it's extremely likely that if I did study it in greater depth, doing so would just confirm the evolution-climate change parallel."

Meanwhile, because Reality loves the skeptics, 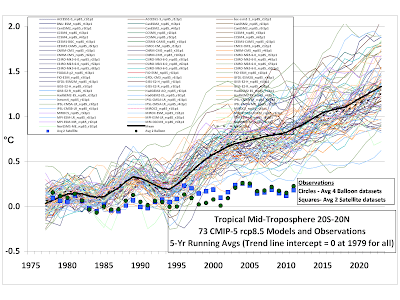 Carbon emissions have been higher than expected. Measured temperatures have falsified every model. The measurements have simplified the argument - it isn't necessary to think enough to understand how the models could never work. In retrospect, this was inevitable. There is only one way to get any kind of measurement match out of the crude things it pleases climate 'scientists' to call models. Overfitting. Every climate model will reliably diverge in the short term, and due to the pro-warming bias, they will all diverge upward.

Being wrong is not a scholarly anti-virtue. The usual scientific practice is to shower false models with jeers - see phlogiston, etc. This is not only unnecessary, it is counter-productive; a large part of secular anti-consciousness is due to consciousness smelling like vitalism.

Failing to correct, however, is not just an anti-virtue, it is a crime against the laws of epistemology.

Carbonic warming's spectacular flaming crash has undermined not only LW's argument for AGW, but its respect for evolution, and doubtless other fields as well. To be clear: the current correct answer for Hallquist, if asked whether he believes in evolution, is "I don't know." He needs more data or analysis.

The scholarly virtues are deriving things for yourself and voting via experiment. Just as macroevolution follows from things like thermo #2, the impossibility of modelling climate follows from chaos theory. (Have you done the derivations? If not, then your correct response is either "I don't know" or to renounce scholarhood.)

If there was ever time for drastic correction, it is now.

We will not see drastic correct. We probably won't even see slow correction. Even hoping for an embarrassed evasion of the topic feels optimistic to me.

I'm posting this to challenge Reality to prove me wrong. Show me that LW converges on the truth. Perhaps it is I who will have to drastically correct.
at 11:39 PM

Are those tropical temperatures? Isn't warming supposed to be (from memory) like 5x more intense in the arctic, according to orthodoxy?

It seems they are indeed tropical temperatures. However, the point is that reality is flagrantly refuting the models. If they switched to predictions that were 5x as intense, they would simply be 5x as wrong. (Dividing the absolute empirical error in the antarctic by the absolute tropic error. If these were even vaguely scientific, reality would have been found within their error bars, [perhaps at the edge] but even their error estimates are wrong.)

The models do not predict. They're overfit. If they get anything right, it's a fluke.

Or: the only reason to believe arctic temperatures are supposed to be more sensitive is from the models. The models are wrong. There is no reasonable justification left.

No. Picking a data set from the lowest single point (tropics), does not refute an average model.

Find a class of representative data sets, average them, then see how it stacks up to the models.

To be clear, I agree that that model distribution looks suspiciously like overfitting+selection, but you can't refute it by simply doing the opposite with the temperature data.