Because I can't link it, here's a post from yesterday on GoodShit, reproduced in full. (Link generally NSFW - it has 'shit' right in the name, this should be obvious.)

this is not a political stand! this is what is happening in the news using art for a growing but still
un-programmed movement. Can change ever be brought about in America unless it happens via the electoral process? 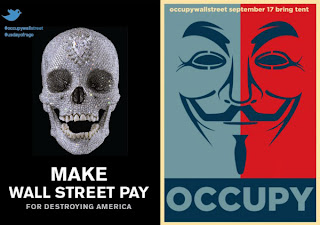 First, this is an excellent case study in journalistic 'framing,' which is a form of begging the question. Lapides is trying to say that it's just a post about art, not supporting or attacking the politics of the movement. But it's actually a vehicle for the idea that the movement is un-programmed.

First, you can tell because it's obvious. You can check because Lapides somehow never finds reason to report on republican social trends.

But because it's obvious, it's not worth discussing. What is worthwhile is discussing whether you can tell when you're doing it.

I have no idea how you tell. But I can tell, by analyzing how I feel about the post. What I usually do is start composing, notice it could be seen politically, then want to claim, as Lapides does, it isn't political. (s/political/any hot button/g) However, I feel a characteristic discomfort with the idea. I feel the need to be emphatic about disclaiming it, I feel like an imaginary opponent is grilling me on it. Of course it isn't imaginary - it's me. I think it's a political stand. I feel like I'm being grilled because I'm grilling myself.
Indeed, now that I think about it, the fact that it occurs to me at all to disclaim its political nature is a bad sign - almost conclusive by itself. Lapides is acting exactly as I do when I feel this feeling, in other words, from which I infer he's also feeling it. So, Lapides could have known it's a political stand, even if he can't logically figure out how. Indeed, he subconsciously does know, and thus I find him culpable.


As long as that discomfort persists, I know I'm still dishonestly framing things. Indeed I feel it right now, from implying that Lapides' partisanship is so obvious as to be unimportant. I actually think it is unimportant because I don't think any progressives read this blog, nor that many ever will, so I'm not begging any questions, nor, if I'm wrong, will I mislead anyone who isn't already mislead. (Getting that paragraph right took a few tries. I'm comfortable now. [It would appear I'm not good at doing it recursively yet. What's most important to me is that I don't mislead people. For example, that I don't mislead you into thinking I care much if I beg the question. I should care, but don't.])


I just realized, through this same kind of self-analysis, that support for an idea is to some extent involuntary. Those pictures in fact make me more sympathetic to the movement. Rationally, they should make me less sympathetic, precisely because at best they don't know how to avoid using those mechanisms, and at worst they find it necessary to appeal to them. Either the movement is itself likely pwned by involuntary mechanisms, or they're intentionally using sophistry.

[Update: Just in case there wasn't enough evidence for you, apparently I'm not the only one who thinks it's obviously partisan.]
at 3:22 PM